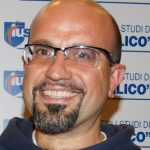 Assistant Professor at University of Parma

From 1993 to 1994 he was with INFO-COM Dept. at the University of Rome, participating in the EEC SPELL-II project.

Since 1995 he was a Ph.D. Student at the Dipartimento di Ingegneria dell’Informazione (DII), University of Parma. He received his Ph.D. in Information Technology from the University of Parma, discussing the thesis: “Sequence estimation receivers for nonlinear transmission channels” (topic: digital communications), in June 1998 at the “Politecnico di Torino”. During his Ph.D. he joined a research project on digital radio links sponsored by Italtel S.p.A., for which he now holds two patents.

From 1998 to 1999 he was a technical staff member at the Dipartimento di Ingegneria dell’Informazione, and from 2000 to 2002 he has been a post-Doc researcher at the University of Parma.

In september 1999 he has been a professor of “Signal Processing” for the “International Summer School on Experimental Physics of Gravitational Waves” at the University of Urbino.

Since 16 september 2002, Armando Vannucci is an Assistant Professor of telecommunications at the Faculty of Engineering, University of Parma, performing his research activity at the Department of Information Engineering (DII).

Regarding the teaching activity, since 2002 to 2010 he has been a Professor in charge of “Signals and Systems”, for the Graduation courses in Electrical Engineering and Telecommunications Engineering, at the University of Parma. In 2003, he authored the textbook “Segnali Analogici e Sistemi Lineari”, (Ed. Pitagora, Bologna, ISBN: 88-371-1416-8). From 2004 to 2010, he has also been in charge of the course “Audio and Video Signal Processing”, for the Master courses in Electrical Engineering and Telecommunications Engineering. These courses have always achieved a 90% (or higher) score (faculty average: 75%), based on the yearly Faculty survey. Since 2012 he is in charge of the course “Polarized fiber optic transmission”, taught in english for the master course in Communication Engineering.

During the Ph.D. and until 1999, the research activity was focused on Digital Transmission, while since the year 2000 his scientific activity switched towards Optical Communications, developing different research topics, all related to optical transmission on fiber optics channels. Recent research topics include: Analysis and modelling for nonlinear propagation in fiber optics; Statistical characterization of Polarization Mode Dispersion (PMD); Theory, modelling and compensation of PMD; Non-linear effects in polarization-sensitive WDM systems; Optical Amplifiers for packet-switched metro networks; models for Semiconductor Optical Amplifiers; Multicanonical techniques and their application to PMD compensation.

The research activity was performed within different research projects, including both research contracts with private firms and projects supported by the Italian government financing (PRIN). Armando Vannucci has been a visiting scientist at the Alcatel Labs in Marcoussis, France (2002) and at the Université Laval, in Québec City, Canada (2007), where he also served as a member of the jury for the Doctoral exams. In 2010, he has been “visiting lecturer” at the Hochschule Karlsruhe, Germany.

The research activity has produced over thirty scientific publications, among which one third “full papers” on international journals, besides conference proceedings, book chapters and industrial patents.

Remarkably, among the evaluation survey performed by the “area panel 09” (industrial and information engineering), published in 2006 by the National Committee for the Evaluation of research (CIVR), a scientific paper by Armando Vannucci was selected among the 9 most representative works done at the University of Parma in the 2001-2003 period, and contributing to the ranking of its university with the largest impact factor. Since march 2010 to september 2012, Armando Vannucci has been the local scientific coordinator of the “Polarizon” project, which was the only PRIN2008 National project to receive funding at Parma University, within the “area panel 09”.

Armando Vannucci is an IEEE member since 1995. He has been a reviewer for a number of international journals, among which: IEEE Photonics Technology Letters; IEEE Transactions on Communications; IEEE Journal of Lightwave Technology; Elsevier – Optical Fiber Technology; OSA Optics Letters. Together with professors Wabnitz and Galtarossa, he has made up the Orginizing Committee for the “International Workshop on NOVEL LASER SOURCES FOR BIOMEDICAL APPLICATIONS”, held at the University of Brescia in may 2012.

Armando Vannucci is a SCUBA diving instructor (NAUI n.50095), is entitled to command motor and sailing boats and has been the 2009 Italian Marathon champion, for the category University-Faculty members.

Some of Armando Vannucci’s published papers (in pdf format) can be accessed here.